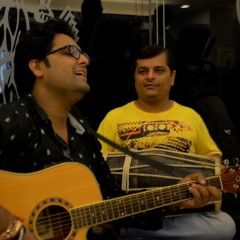 Soulful and earthy, Saurabh captivate audiences with his other worldly renditions of Punjabi Folk and Sufi compositions. Hailing from Ludhiana district of Punjab, Saurabh is a vocalist trained initially in the Patiala Gharana and now the Jaipur Gharana of Hindustani Classical Music under Smt. Sohini Mishra. An electrical engineer by training, Saurabh soon realized that his true calling was that of a musician and moved to Mumbai to pursue a career in music after a brief stint in Nashik. He was mentored and guided on this path by Manoj Sharma and Manoj Pandya, who nurtured his unquenchable thirst for music with constant encouragement and training. They were the first people to introduce Saurabh to Music and have accompanied him ever since.

NSPA Talks | Saurabh Sharma on NSPA and Busking on Streets

“Saw a beautiful folk set by Ellie and Zack at Churchgate stn. :)”

“My first ever seen live street performance with great message.”