The literary world has lost one of it’s most valued and shiniest gems – Harper Lee. Her debut novel – To Kill a Mockingbird – is perhaps one of the most read works of literature. It will forever be one of the most enlightening and sensitizing works on the issue of racism and discrimination and we know that countless hearts have softened and minds have opened after reading her moving tale. Harper Lee published her second work last summer. Titled ‘Go Set a Watchman,’ it digs deeper into the lives of the characters from her previous book. In remembrance of her humane, egalitarian outlook, here are some of her best quotes, from her books as well as other sources. 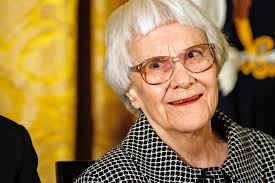 “I wanted you to see what real courage is, instead of getting the idea that courage is a man with a gun in his hand. It’s when you know you’re licked before you begin, but you begin anyway and see it through no matter what.” – To Kill a Mockingbird

“People generally see what they look for, hear what they listen for.” – To Kill a Mockingbird

“I think there’s just one kind of folks. Folks.” – To Kill a Mockingbird

“You never really understand a person until you consider things from his point of view … Until you climb inside of his skin and walk around in it.” – To Kill a Mockingbird

“It’s better to be silent than to be a fool.” - Alabama Academy of Honor Speech 2007

“Some things should happen on soft pages, not cold metal.” - Letter to Oprah in 2006

“Atticus, he was real nice.”

“Most people are, Scout, when you finally see them.” – To Kill a Mockingbird

“A man can condemn his enemies, but it’s wiser to know them.” - Go Set a Watchman

“Prejudice, a dirty word, and faith, a clean one, have something in common: they both begin where reason ends.” - Go Set a Watchman

“It’s never an insult to be called what somebody thinks is a bad name. It just shows you how poor that person is, it doesn’t hurt you.” – To Kill a Mockingbird

If you haven’t read her works yet, we encourage you to do so, soon!