No, this article is not really about the Harlem Shake. Although we love the way one can flail one’s hands, legs and any other body part around while doing this very strange dance, we’re not going to talk much about this dance fad. We are however, going to talk about something a lot more interesting – The Harlem Renaissance, an important, or perhaps,one of the most important cultural movements in African-American history. (Another no, the Harlem Shake has nothing to do with the Harlem Renaissance. But, don’t click that tiny red cross yet, for this article promises to offer you an interesting glimpse into one of the most influential movements in the history of the art world.) 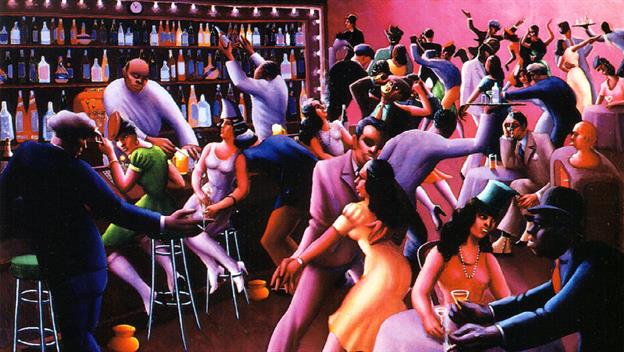 The Harlem Renaissance, also called the New Negro movement was a cultural movement that saw a blossoming of the African-American arts heritage. Harlem, New York became a hotbed of literary, musical, theatrical and visual art activities in the 1920s and 1930s. The reasons for this sudden explosion of creativity are many. While some say the ‘Great Migration’ which saw thousands of colored people move to the North in search of employment opportunities, precipitated the movement, others attribute it to the sense of liberation and independence that was felt with the abolishment of slavery. Yet others say it grew out of a sense of discontent from years of being discriminated against. What is clear however, is that this movement instilled a strong sense of racial pride in the black people and this emboldened them to express themselves, their thoughts, opinions, ambitions and fears through every art form available.

The Harlem Renaissance has contributed much to not just American culture, but also to modern day art, social reform and the fight against racism. It also offered to the world extremely talented artists who strove to upturn stereotypes and introduce new ideas through their works. Some of the most important contributions happened in the fields of literature and music. Jazz music, often considered to be America’s first authentic art form, was one such offering. The influence of jazz brought about changes not just in the musical arena but also in the cultural practices of the age. It also seen the blurring racial divides as more and more white people began appreciating jazz music, and therefore, black musicians. Dance forms like Charleston and tap dance, often associated with jazz music, became international fads. Louis Armstrong, Duke Ellington, Billie Holiday are important musicians from this age.

Interesting developments were seen in the field of poetry too, as many black writers drew inspiration from jazz harmonies and folk songs to develop new poetic styles. Black woman’s poetry contributed much to the age and explored themes like gender stereotypes, the meaning of beauty and the place of black women in black and white societies. Some important poets from the day are Langston Hughes, Claude McKay, Alice Dunbar Nelson and Allan Locke.

The implications of this cultural movement were many, especially for the African-Americans. For one, it helped them develop a new identity, one that commanded more respect and therefore, one that they began to take pride in. It also established new genres in the field of art, genres that were unique to African-American artists and therefore, considered to be a part of their culture. Most importantly, it made the world stand up and take notice of African-American art, culture and fashion and hence, made us more aware of the African-American experience and the problems faced by them. If you think about it, this movement is probably the reason why we today have pop and rap icons like Beyonce, Lil Wayne and Snoop Dogg!

And now, since you were patient enough to read through the entire article, here’s a small treat!