If you’re the kind of person who always ends up late for a movie, you probably haven’t given much thought to this, but, if you are a graphic designer, a digital artist, or even a robust cinephile, you surely must have noticed the interesting title sequence that brings in a movie. This sequence can be quite boring if not presented properly, for all it does is list out the names of people who’ve worked on the film, and if this list doesn’t contain the name of a friend or family member, most of us don’t really bother glancing at the screen. However, when these names are coupled with attention-grabbing graphics, we end up paying attention and slowly, we find ourselves being sucked into the moment. We begin to sense the feel and mood of the movie. In a way, this 3-4 minute sequence readies us for all that is to come. This is what title sequences are for and directors are increasingly putting more efforts into making these sequences as gripping as possible. 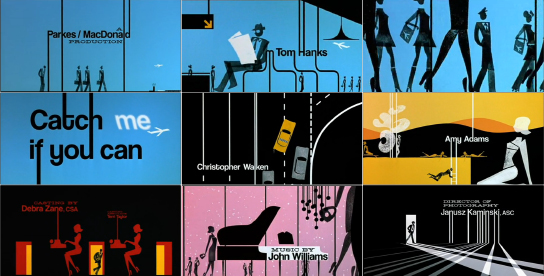 Title sequences in the silent movie era were quite different. To begin with, black and white were the only two colours that could be used and secondly, there wasn’t the concept of animation, or even sound for that matter. So the name of the movie, the director and other details regarding copyright and marketing information were presented on title cards. A lettering artist was responsible for choosing the right font and format for presenting the information. A characteristic feature of title cards from this era is white lettering against a black background. However, even in this era of monochrome-ness, lettering artists tried to match typography with the zeitgeist of the age. Good examples of experiments on this front can be seen in movies like ‘The Cabinet of Dr. Caligary’ and ‘Nosferatu.’ While the typography in the former seems to be heavily influenced by German Expressionism, the later displays Art Deco design characteristics.

Humorous Phases of Funny Faces (1906) was the first film, although a short film, to have introduced an animated opening title. Take a look at it here:

During the 1920s and 30s, directors attempted to convey the mood of the movie through the opening title and hence, letter artists began experimenting with font styles and slide designs. For e.g., blackletter fonts were used to evoke horror, ribbons and flowers to connote love, etc.

When sound made its way into movies, not much of a change was seen in the presentation of the title sequence except for now being accompanied by music. However, it’s important to mention the efforts of animator and painter Oskar Fischinger who strove to sync the rhythm of the audio with the visuals in title design.

True headway in the field was made in the 1950’s, with graphic designers like Saul Bass, Pablo Ferro, Maurice Binder and Richard Williams, coming up with innovative ways to present the title sequence. Visuals that communicated the mood/theme of the film were inserted into the title sequence, typography was experimented with and was made to interact with metaphorical imagery to familiarize the audience with the tone of the film. Designers employed montage techniques, live action and typography in motion to make title sequences more interesting. Directors like Otto Preminger, Alfred Hitchcock, Blake Edwards and Stanley Donen encouraged and embraced these new forms of presentation. By the mid-60s, title sequences became an integral part of films and title designing became a new kind of necessary art. Title designers therefore became celebrities in their own right and were sought after by filmmakers eager to have their opening credits displayed in style.

From the mid-1990s, one spies even more innovation in the presentation of the title sequence. Designers of this generation are tech-savvy, design literate and have also studied the art of making film title sequences. They have been exposed to the work of great title sequence designers of the past and can, at will, use their trademark styles to recreate the zeitgeist of an era. Modern title sequences make use of progressive technologies like computer graphics, aerial or underwater photography, 3 D animation, etc.

The title sequence of the movie Se7en is considered to be “one of the most important design innovations of the 1990s” according to New York Times Magazine. Take a look at this blood-chilling sequence here:

The title sequence of the movie ‘Up in the Air’ makes generous use of aerial photography.

It’s clear that the art of title sequence making has developed greatly over time and has now become an integral part of a film. We are sure that the years ahead will usher in a string of further innovations and experimentation so that film lovers and design connoisseurs will always have something new and exciting to marvel at.

We hope this article has made you aware of and interested in this not-so-often talked about section of a movie. Hopefully, the next time you watch a movie, you will watch the opening credits with a lot more attention and enthusiasm!