If you love familiarizing yourself with the traditional legends that breathe life into cultural performances and are also a connoisseur of over-the-top getups, this ancient Buddhist dance form will captivate you like a burning flame captivates a moth. The Tsam (pronounced Cham) dance is a traditional Tibetan-Mongolian dance form that enacts and imparts Buddhist teachings and principles. Once prolifically performed in regions practicing Tibetan Buddhism like Mongolia, China, Tibet, Nepal, Bhutan, Sikkim and Ladakh, today it is only performed in remote monasteries in Ladakh, Bhutan and more recently, in Mongolia, where senior Buddhist monks are trying to keep this ancient art form alive by passing on information about it to their younger disciples. It is widely known that the surest way to obliterate a culture is by obliterating its art and this effacing process was carried on with much gusto by soviet Russia and communist China. As a result, the performance of this ornate ceremonial dance form drastically dwindled and today, there exists the threat of it being forgotten forever. By shining the spotlight on this wonderful art form, this article hopes to avert this amnesiac disaster and reintroduce it in not just dialogues around dance, but also in the cultural repertoire of a community.

The Tsam dance which was traditionally performed during a Tsam ceremony, was a ‘masked dance’ performed by skilled dancers, mostly Buddhist monks who had mastered the art of Tsam dancing. The dancers wear papier mâché masks and are said to channel the Divine. The masks, which are huge, grotesque and elaborately decorated, are used to depict different characters from local legends and religious mythology. Common characters are the funny White Old Man, the Dark Old Man, and Buddhist deities like the fierce protector Gods or Tshoijoo – The Lord of Death. There are also animal masks that depict positive or negative influences. Instrumental music, performed mostly using percussion instruments like cymbals, the Denshig, the Tibetan Flute and the Dramyin, which is a seven-stringed lute, supplies rhythm for the dancers to dance too and also communicates the emotional state of characters. The stories of these dances center around the triumphing of good over evil, the purification of a place or the mind, Buddhist meditation practices and ethics. 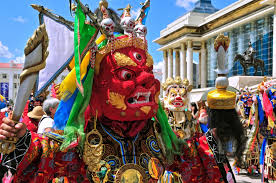 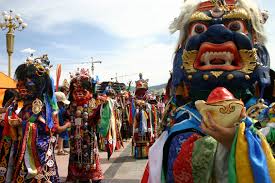 Buddhist monks and those acquainted with the tradition are doing their best to resurrect this forgotten dance form. If you wish to be a part of a Tsam ceremony, you can travel to Amarbayasgalant Monastery in Mongolia where the Tsam Dance Festival takes place every year. Although this would involve a long travel and stay, we say it’s worth your time and money, right?

We end with a short video of this dance. Hopefully, the grandiose costumes, exaggerated masks, traditional choreography and culturally rich story line will motivate you to make the trip to witness this festive spectacle in person!