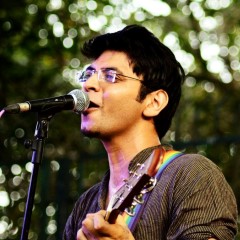 There is much more to this singer-songwriter than meets the eye. A software engineer by training, he put in his papers a year into his first cushy job to pursue his passion- making music. He went on to study at the Audio Media Education wing of A.R. Rahmanâ€™s K.M. Conservatory and thereafter, at the Film and Television Institute of India (FTII), Pune. Pratyul was adjudged the Best Rock Vocalist at the Delhi International Music Festival in 2009. Now based in Mumbai, Pratyulâ€™s skills as a sound recorder and mix engineer fetch him his living. Music got him through the monotony of engineering college for sure, but soon enough became the calling of his life.

A self-taught musician, Pratyulâ€™s music comes straight from his heart, drawing upon his wanderlust trails across India and flowing through his disarmingly emotive self. The smooth talker belies his intense core that embraces the artistâ€™s struggle contentedly and follows his passion with courage.

“A great effort and congratulations to all those who worked to make it happen.”

“MORE POWER TO YOU!”