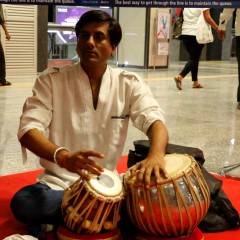 Manoj Sharma is Saurabh Sharma’s uncle, mentor and guide . Along with his friend Manoj Pandya, they were the first people to introduce Saurabh to Music and have accompanied him ever since. Manoj Sharma is a Tabla player who has trained under the famous Tabla Maestro Pt. Ramakant Mapsekar. Alongwith Manoj Pandya and Saurabh Sharma , he performs on the NSPA stage with the desire to bring their music to people and through their music they wish to bring a smile to the commuters face.

“Good job, not seen this in Mumbai before. Keep it up. Very happy.”