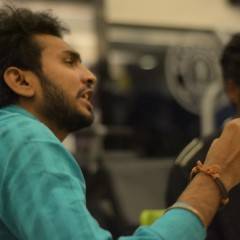 Blessed with a powerful, rich voice, Rahul infuses a soulful Sufi touch to every song he sings. Lead singer of the Sufi rock band RAM-Trio, he enjoys singing both Sufi and Fusion songs. The band was formed in May 2014 and has since been making a name for itself in the indie music scene. The objective of the band is a noble one, to unite people coming from different backgrounds. They find a metaphor for their message in Fusion music, which mixes two or more styles to create something unique and inspiring.

“Thanks to u and ur authentic orchestra.. just experience it at churhcgate stn”