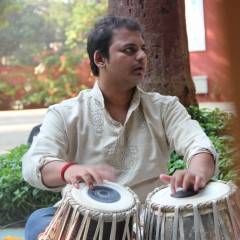 Born in Belgaum and raised in Goa, Rahul is somewhat of a music prodigy. Rahul was all of one year old when his musical talent spilled onto kitchen pots and pans creating a pandemonium in his house. If only to manage the sound levels at home, Rahulâ€™s father handed him a dholki. Within six months, at the age of just one and a half years, he was already playing the first basic taal of any Hindustani Classical student- â€˜Teentalâ€™ taught to him by his cousin. Soon his parents registered him for Tabla classes recognizing his talent for music. Rahul started training under Shri Mahesh Shetye, disciple of Talyogi Pt. Shri Suresh Talwalkar in Goa. He has since shifted base to Mumbai and has been training under the renowned Pt. Shri Satyajit Talwalkar.

Rahul remains the solitary soldier of his family that continues the legacy of his musician grandfather late Pt. Shri Vasant Manerikar who was a well-known Marathi folk exponent in Goa. At present, Rahul performs as a freelance Tabla player in Mumbai city and is particularly recognized as one of the best of his league in Vasai Taluka. His genres include Hindustani Classical style, Sugam Sangeet as well as Fusion. Off late, Rahul has also started jamming with metal rock and jazz bands as well as folk musicians.

NSPA: At the Colourbox | SNEHA (Dharavi)

“In this busy life schedule I could take time off to listen to the performer. Hope this will bring forth also the poorer folks, that they would be given opportunities”