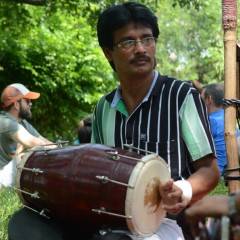 Born to a family of eight in Samastipur, Bihar, Krishna Kant Singhâ€™s tryst with the Tabla and music itself seems almost like an accident of fate. Enchanted by his elder brotherâ€™s mastery of the Dholak, he would keep himself occupied creating beats on modest tabletops. However, it wasnâ€™t until the final year of school in 1984 when an urge to leave a mark by performing â€˜somethingâ€™ at the school annual function found him at the doorstep of tabla guru Pandit Ramnaresh Roy in search of a Dholak to borrow. He, thus, started training at the age of 17 and went on to achieve Tabla Prabhakar from Prayag Sangeet Samiti, Allahabad.

A decade later in 1995, KK Singh stormed out of his house in fury on receiving a severe dressing down from his family for having failed the State Police Services entrance exam. Thereafter, his arrival in Mumbai would also mark his commitment to music as a full time career option. Singh has now been an accompanying artist with Bharti Vidya Bhavan for nearly a decade and half.

“Just read about this! brilliant work you doing out there :)
just made me smile. Thank You!
hope to catch the next one at churchgate”

“MORE POWER TO YOU!”