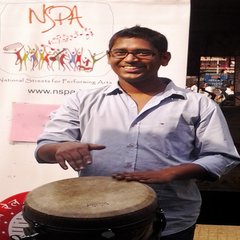 Nitesh’s middle name may as well be Curiosity, for it most perfectly describes the essence of this effortless musician. He began young, fiddling around with his Grandfather’s unused Dholki and almost immediately graduating to perform at the local Ganesh Utsav festivities. Nitesh then began seeking formal Hindustani Classical training on the Tabla. Two years later, he joined the Ustad Allah Rakha Tabla Institute, Mumbai to enhance his proficiency with the Tabla. In a year’s time, the popular and eclectic Taufiq Qureshi took Nitesh under his wings. The past four years have been an exhilarating journey for Nitesh, training and performing with Qureshi’s sensational percussion ensemble ‘Mumbai Stamps’.

Nitesh primarily plays the Djembe (an African percussion instrument) but with Mumbai Stamps extends his creativity to a wide variety of commonplace items (such as plastic buckets, drums, waste bins, tin drums, etc) to create interesting percussion pieces off them. Despite his impressive career track thus far, having performed at the Indian Premier League and Commonwealth Games, 2010 as well as recording for background scores of Bollywood movies, Nitesh is a most simple and generous-hearted musician who wants nothing more than to take his music to the people.

“Pratyul Joshi, All the best. You have a promising career ahead. As for the initiative, thumbs up. Suggestion: You can conduct street plays on general awareness. Am sure people will watch just like this!”