Yesterday, while glancing through our Facebook feed, we came across an article that made us stop mid-scroll. The article in question announced the re-circulation of a particularly scandalous magazine that made waves in 1960’s underground press scene – The Oz Magazine. For those who don’t know, the magazine cooked up quite a storm in its heydays, with several of its editors having to undergo obscenity trials. The magazine was famous for serving up psychedelic images (with highly suggestive, bordering on pornographic content) and though one might find fault with the nature of the content, one surely can’t ignore the very fine artwork offered up by the magazine. The news got us thinking about this interesting art movement that gripped America in the mid- 60’s – early 70’s – the Psychedelic art movement. After re-visiting some very fine artwork from the age (the Fillmore Posters and Victor Moscoso’s ‘Neon Rose’ posters) we felt inspired to write about this bold, controversial art movement so that everyone reading our blog would get acquainted with the principles, philosophy and wonderful works of this art movement. 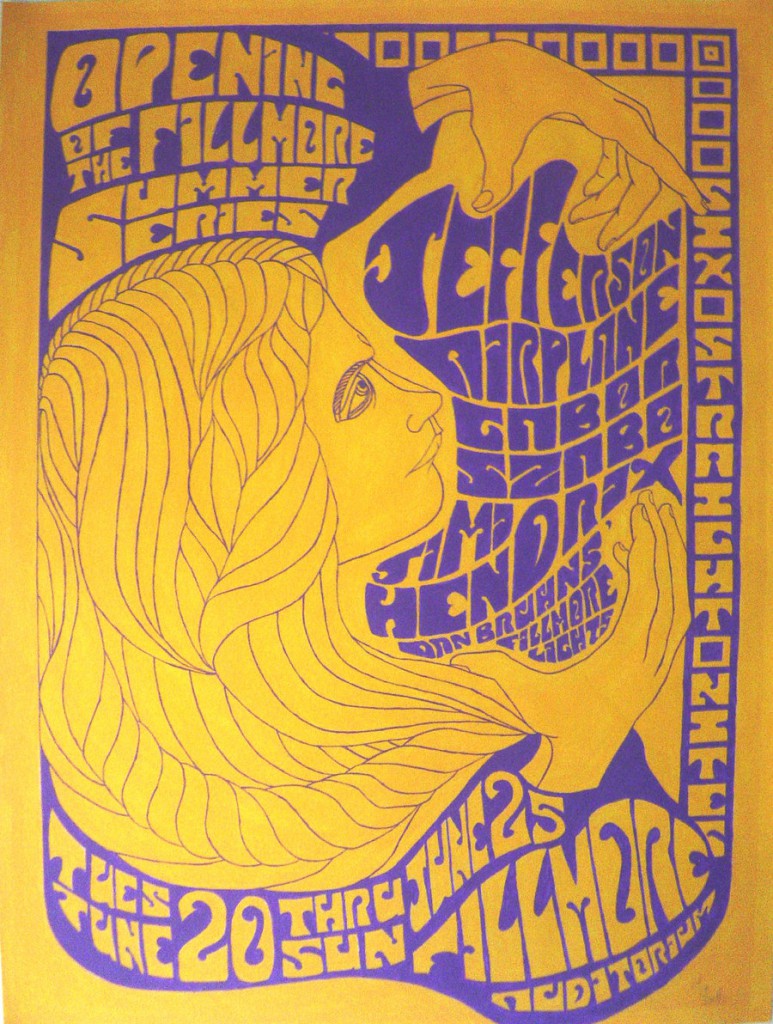 A poster designed for The Fillmore, which was a very popular concert venue in San Francisco 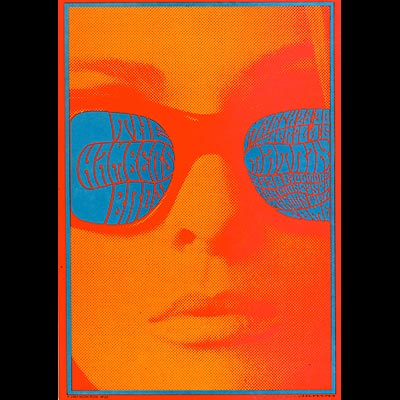 Let us begin by explaining what psychedelic art was all about. Psychedelic art sought to replicate the inner psychic state of an individual after he/she has consumed hallucinatory or psychoactive drugs, like LSD or MDMA (Ecstasy) Bright, contrasting colours, kaleidoscopic patterns, rubber-like typography and surreal imagery was used to depict drug-induced hallucinations and experiences, or simply put, the feeling of enjoying “a good trip.” This art movement was influenced by several of its precursors, like the Art Nouveau movement, Surrealism and Pop & Op (Optical) art movements. However, it is important to note that along with replicating the tangible aspects of a trip, this art movement also sought to depict the metaphysical journeys one goes on and therefore, the subject matter of this movement is often provocative, surreal, symbolic and philosophical. Psychedelic art was also influenced by the psychedelic music of the day and vice versa. Psychedelic artwork blossomed on concert posters, album covers and in the underground newspaper and comic book scene.

If the inspiration behind this movement, which clearly is a drug revolution, has ruffled you feathers, sit back and read ahead, for it is equally important to understand why drugs became so popular. To understand this, you’ll first have to acquaint yourself with the youth counterculture movement of the 1960’s. This movement, which was kick-started by the ‘Baby Boomers,’ who were now young adults, saw an intellectual awakening amongst the youngsters. They wished to explore and address controversial issues that were important but had been swept under the carpet for far too long. There were discussions around civil right, wars, drug use and sexuality. The zeitgeist of the age was that of liberty, non-conformity, egalitarianism and freedom of choice and expression. It was thus, one of the most liberal, progressive movements in America. Along with being fired up by these libertarian ideals, the youth were also attracted towards Eastern mysticism and philosophical meditation and one finds expression of both these in the art of the day.

This grand movement gave birth to some grand designers who made indelible contributions to the art world. Here are two psychedelic arts extraordinaire you should know about –

Wes Wilson: He is famous for coming up with that melting psychedelic font which has now become synonymous with the peace movement and psychedelic era. He is also famous for his psychedelic poster designs, especially the ones he designed for The Fillmore. 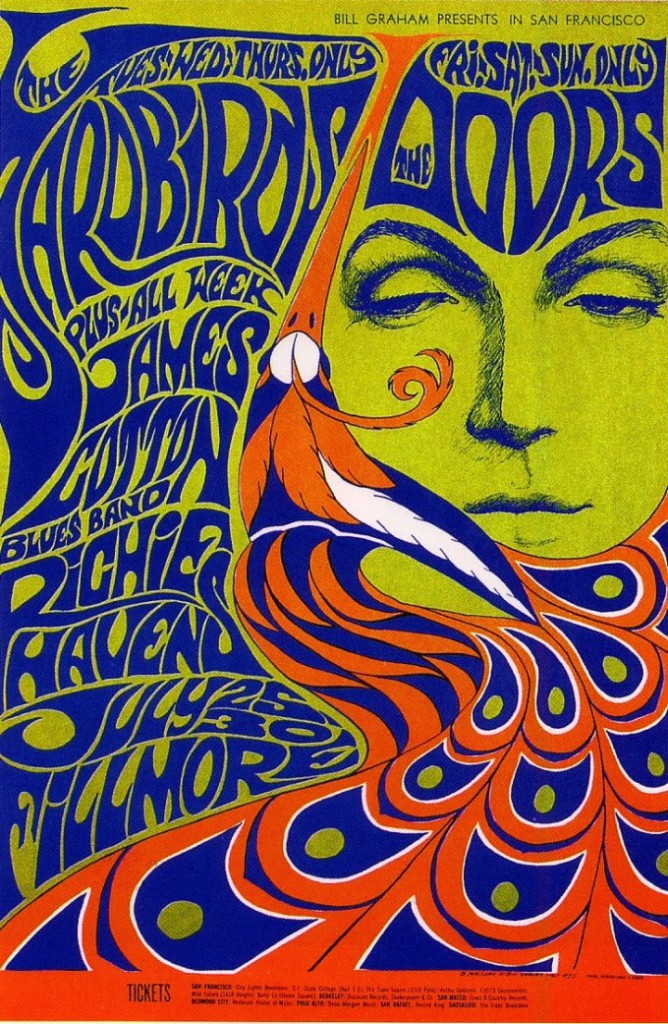 Victor Moscoso: He is most famous for his concept of ‘vibrating colours’ which he achieved by pairing colours from opposite ends of the colour wheel. This gave his images a psychedelic effect. 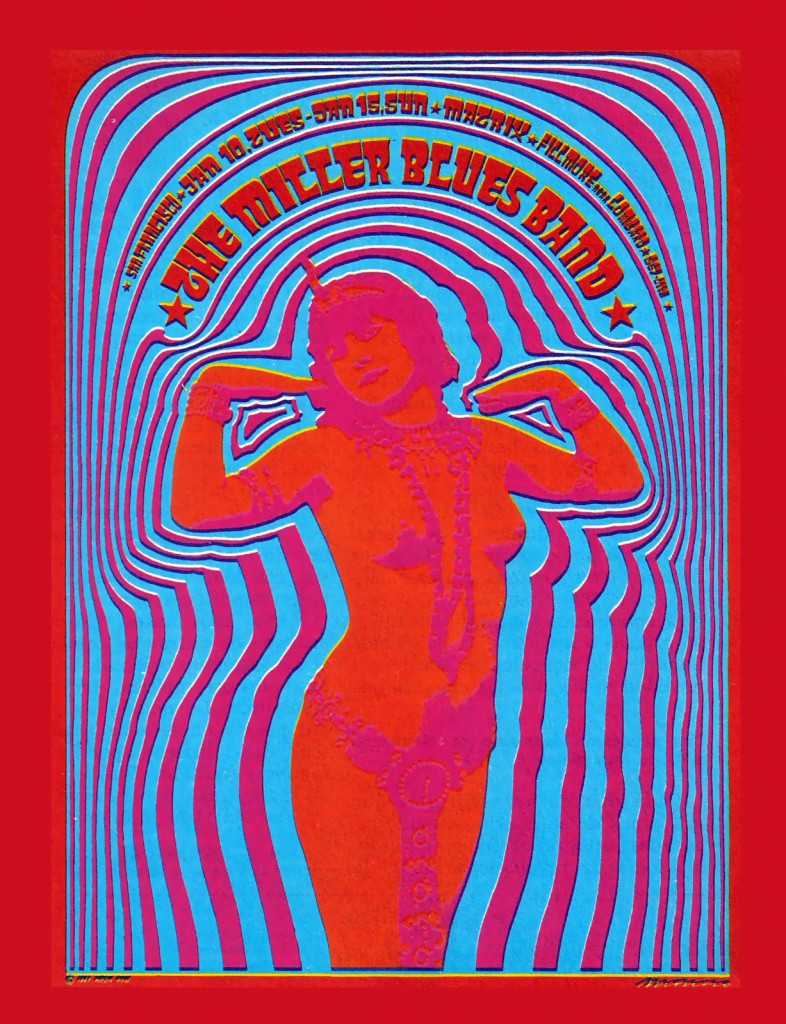 His ingenious use of colours to create a vibrating effect

Rick Griffin: Was famous for his psychedelic posters as well as for his involvement in the underground comic scene. His posters too have a comic book design feel. 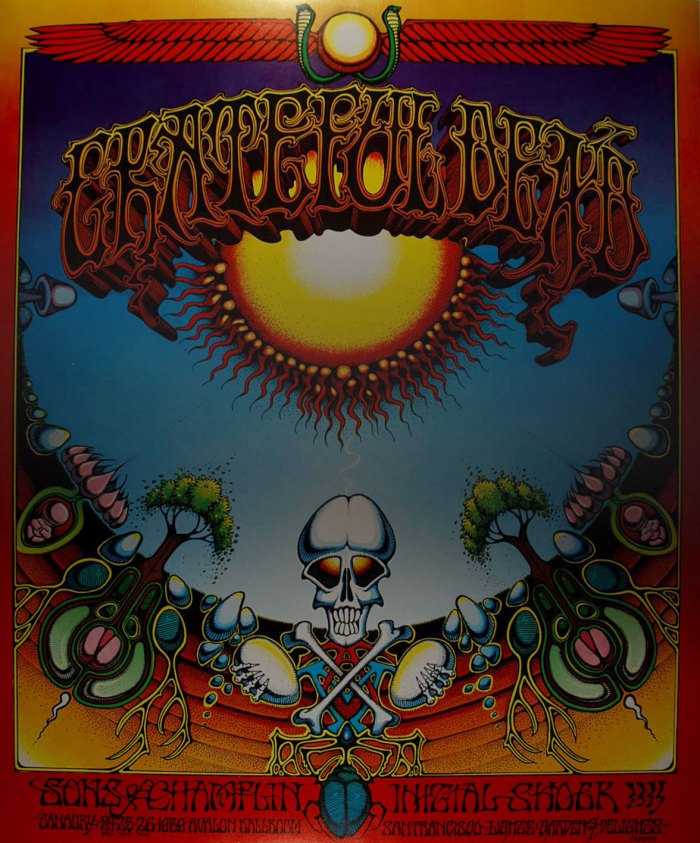 The psychedelic art movement was one of the most interesting art movements the art world has ever experienced and it has influenced countless movements after it. Even today, one can see principles of this movement being applied in films, adverts, designs and other artistic endeavours. Although the movement has long gone past its prime, its style, and the ideals it stood for, will forever serve as an inspiration to artists and art lovers around the world!