Many religious texts impart a scared status to the human body. This perishable figurine, formed of flesh, bone and blood, is believed to house the divine or be “made in its image and likeness.” Hence, we are urged to care for the instrument, to refrain from doing things that will harm it and to keep it toned, agile and healthy. For example, the Catholic Church dissuades its flock from getting piercings, tattoos or disfiguring the body in any way. Shaolin Monks on the other hand, are known to push their bodies to the limit in pursuit of strength and swiftness. We are constantly reminded of the power and purpose of our mortal frames, for without it, we would simply cease to exist.

Artists have always been aware of the potency of the human form and have explored, experimented, celebrated and commented on it through their works. Whether in the form of a painting, a carefully clicked photograph or a life-like sculpture, time and again they have sought to perfectly depict the human body in all its imperfection. However, artists seldom like sticking to the mundane, the usual and are constantly on the lookout for newer, more shocking mediums to express themselves. It didn’t take long for them to begin using the human body itself to create art. The practice of decorating the human body using paint or ornaments has been around for ages. Artists, however, take this practice to a whole new level by experimenting with a range of methods to tweak, re-shape, distort and re-imagine the human body. Thus, body art is a kind of modern performance art in which the body itself is used as a canvas or medium through which ideas are expressed. The most common types of body art include piercing, tattooing, body painting and henna painting. However, some forms can be more extreme and painful and could involve permanently altering the appearance of a part of the body or the entire body. Scalpelling, scarification, branding, introducing subdermal implants are examples of such forms of body art. 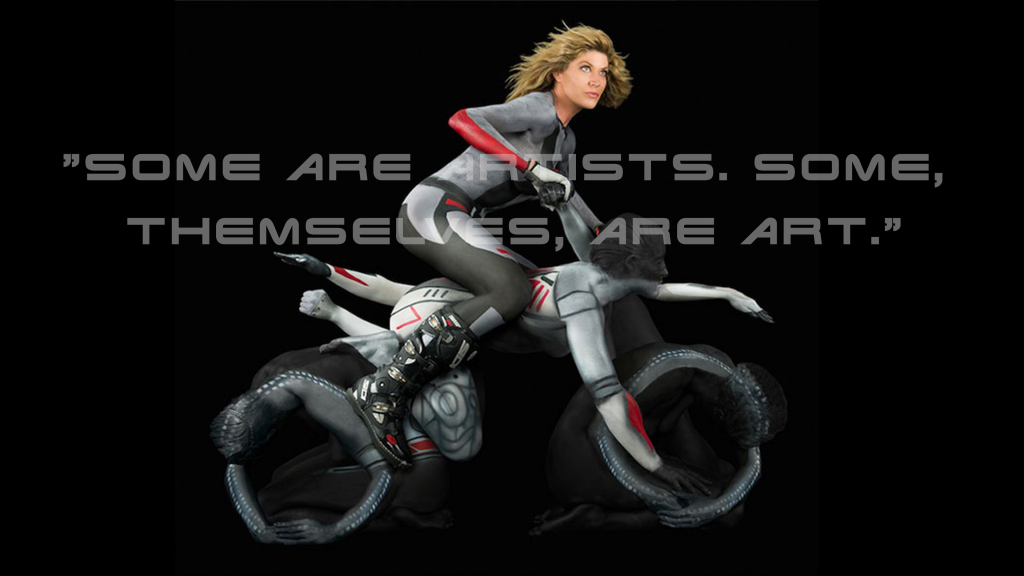 Here are a couple of interesting examples to help you understand and identify this performance art form better.

Japanese artist Chooo-San uses paint to transform the human body into a futuristic canvas which depicts the merging of technology and human anatomy. 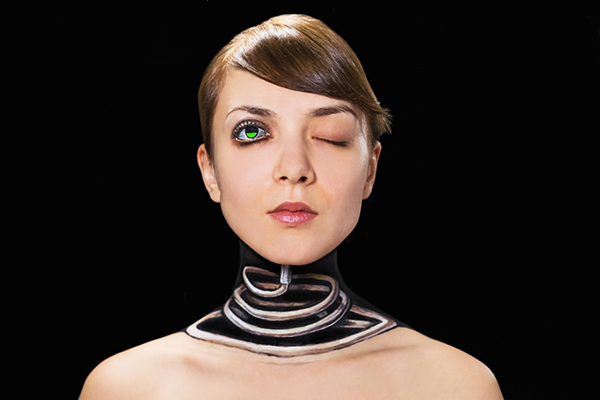 Marina Abramovic is a well-known 21st century performance artist. She is known for her outrages but insightful performances which have included cringe-worthy acts like stabbing a knife through the gaps in her fingers and lying down inside a wooden star set on fire. Rhythm 0, however, has been her most boundary-pushing act so far, and a great example of the body being used to evoke/create art. In this act, she set up 72 items on a table, which included a feather, saw, Band-Aid, gun, bullet and a whip among other things, and invited the audience to use these on her person in any way they pleased, while she lay motionless and mute. Read more about this experiment here: http://www.theartstory.org/artist-abramovic-marina-artworks.htm

The Human Canvas Project by celebrated photographer Art Wolfe is another great example of body art. In this project, the photographer uses the human body, patterns, textures and photographic techniques to create art. 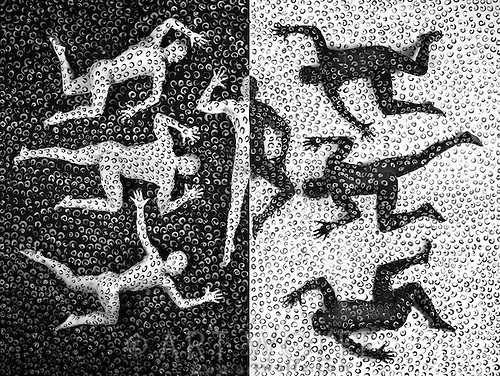 This artist’s work shows how people ‘blend in with their surroundings,’ but quite literally. He paints himself like the backgrounds he stand against with such accuracy, that like a chameleon, he becomes indistinguishable from his surroundings. 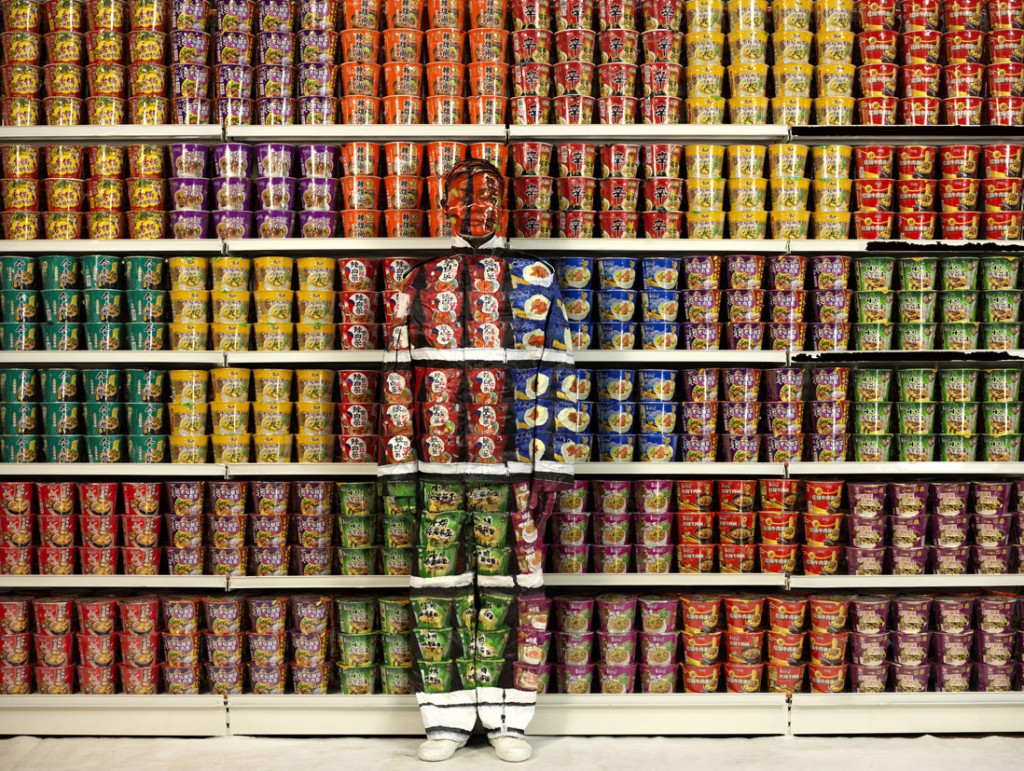 Emma Hack is a visual artist known for her exceptional painting skills. For an Australian Road Safety campaign, she structured a crashed car, using human bodies! Seventeen people, which included acrobats, athletes and body builders, arranged themselves in challenging contortions to mimic the dented, destroyed body of a crushed car. 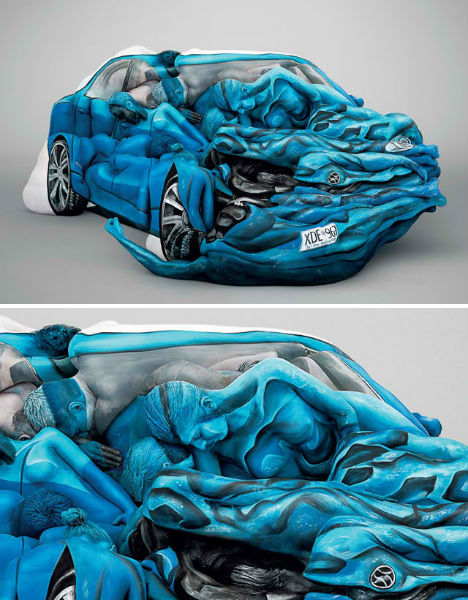 Many artists use their skill to make 2 dimensional images seem real, or 3 dimensional. Alexa however paints real people to make them look like 2D paintings. 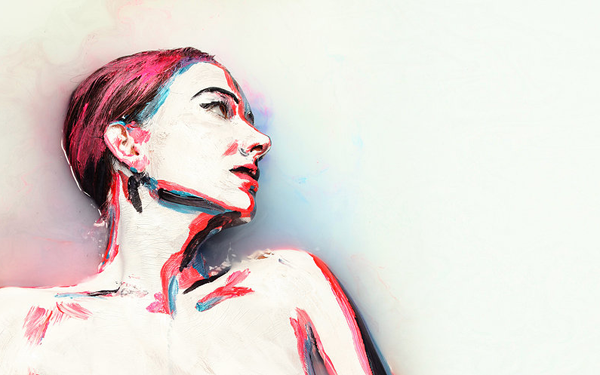 This is a real model, lying in a tub of milk.

So, are you going to try making art with your body soon?